The Honda Myth: The Genius and His Wake (Hardcover) 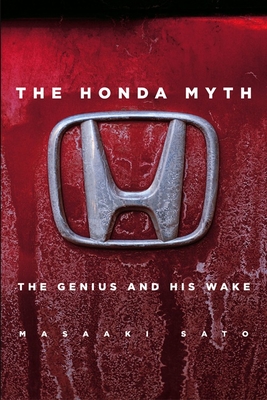 From the top Japanese auto-industry journalist comes this inimatably informed account of Honda Motor Company's birth out of the ashes of World War II and subsequent rise. As gripping as it is enlightening on far more than its main subject. Sato's unbiased reckoning won him Japan's premier non-fiction award. Available in English for the first time with a new chapter exclusive to this edition and prefaced by Paul Ingrassia, The Honda Myth is indispensable reading for industry insiders, business leaders and car enthusiasts.

The first Japanese automaker to open a factory in the U.S., Honda grew its North American share in the 1970's with the introduction of the first environmentally friendly car, the Civic. Just as the manufacturer's combination of engineering excellence, racing dominance, and risk-taking was driving it into the international spotlight, however its trademark free-spiritedness threatening to take a backseat to bureacrary and complacency.

Honda was the brainchild of two very different men. One, a genius engineer who never went to college but became the face of the company-Soichiro Honda. The other, a shrewd businessman who breezed into management and directed behind the scenes-Takeo Fujisawa. Apart, they may have never met international success, but together they made their mark. Yet, after Honda and Fujisawa's retirement, and decisively after the departure of heir apparent Shoichiro Irimajiri, Honda Motor looks like what it once seemed incapable of becoming-a faceless firm.

Overshadowed by the ever-changing competition in areas like F1 racing and low-pollution engine technology that were its pride, the old hothouse of invention is less sexy these days. The Honda Myth argues that the cult worship of Soichiro Honda that Takeo Fujisawa formented, at first to the firm's great benefit, worked against it in subtle ways as well. Though the company's future looks bright, it offers no beaming face.

Masaaki Sato simply has no peer when it comes to reporting on the Japanese auto industry, his prominence dating back to the 1980's when he was on the auto beat for Nikkei (the Japanese Wall Street Journal). Currently an executive at Nikkei Business Publications, he is the author of highly regarded histories including one on the early days of home video technology (i.e., VHS vs. Betamax) and that has been adapted to the big screen. His most recent book is The House of Toyota.

"The engineering innovations that spurred Honda's growth in its first quarter-century have given way to more convention forms of success. No one can understand Honda, or the current state of the global auto industry without reading Mr. Sato's book."
-Pulitzer Prize-winner Paul Ingrassia

"Masaaki Sato's career as a business journalist enabled him to see firsthand much of the evolution, struggles and fascinating men who built Honda, the youngest of Japan's automotive giants. Sato does a masterful job of weaving together the ambitions and conflicts between the strong personalities of the Honda Founders with the economic, industrial and political upheavals that tipped global automotive power in Japan's favor and vaulted Honda into Japan's Big Three despite the obstacles thrown in its way."
-Maryann Keller, leading auto industry analyst