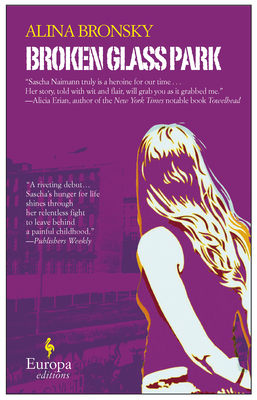 Russian-born Alina Bronksy has been the subject of constant praise and debate since her debut novel, Broken Glass Park, was published in Germany in 2008. She has been hailed as a literary prodigy and her novel as "an explosive debut" (Emma Magazine). Now, Broken Glass Park makes it's first appearance in English in Tim Mohr's masterful translation.

The heroine of this throughly contemporary novel is Sascha Naimann. Sascha was born in Moscow, but now lives in Berlin with her two younger siblings and, until recently, her mother. She is precocious, independent, street-wise, and, since her stepfather murdered her mother several months ago, an orphan. Unlike most of her companions, she doesn't dream of escaping from the tough housing project where they live. Sascha's dreams are different: she longs to write a novel about her beautiful but naïve mother and she wants to end the life of Vadim, the man who brutally murdered her.

Sascha's story, as touching as any in recent literature, is that of a young woman consumed by two competing impulses, one celebrative and redemptive, the other murderous. In a voice that is candid and self-confident, at times childlike and at others all too mature, Sascha relates the struggle between those forces that can destroy us, and those that lead us out of sorrow and pain back to life.

Germany's Freundin Magazine called Broken Glass Park "a gripping portrayal of life on the margins of society." But Sascha's story does not remain on the margins; it goes straight to the heart of what it means to be young, alive, and conscious in these first decades of the new century.

A finalist for the prestigious Ingeborg Bachmann Prize
Now an award-winning motion picture with planned US release in 2015.

Russian-born Alina Bronksy is the author of Broken Glass Park (Europa, 2010); The Hottest Dishes of the Tartar Cuisine (Europa, 2011), named a Best Book of 2011 by The Wall Street Journal, The Huffington Post, and Publisher's Weekly; and Just Call Me Superhero (Europa, 2014).

Tim Mohr spent the 1990s as a club DJ in Berlin and much of the next decade as a staff editor at Playboy magazine. He is the translator of Guantanamo, by Dorothea Dieckmann, which won the Three Percent award for best translation of 2007, and Wetlands, by Charlotte Roche. He is currently at work on his own book, a history of the punk music scene in East Germany.


“What a literary creation! No wonder this book was such a sensation in Europe.”
—Shelf Awareness

“Bronsky writes with a gritty authenticity and unputdownable propulsion.”
—Vogue

“Bronsky instinctively understands that the way to a reader’s heart is through great characters.”
—Library Journal

“A vivid depiction of contemporary adolescence under pressure.”
—Boston Globe

“Dealing with universal themes in the context of very modern problems, Bronsky adds an exciting new voice to the literary world.”
—The Daily Beast

“A sharp and funny first novel.”
—The Minneapolis Star Tribune

"The most exciting new arrival of the season."
—Der Spiegel

"The literature industry has a new prodigy! Bronsky is an immense talent."
—Focus (Germany)


Praise for Alina Bronsky's The Hottest Dishes of the Tartar Cuisine

“A masterful study in delusion.”
—The Financial Times

“[Rose is] one of the most fascinating women in the world.”
—The Millions

“What begins as a cruel comic romp ends as a surprisingly winning story of hardship and resilience.”
—The New Yorker

“I plan to . . . read whatever comes next from this important new literary voice.”
—Ms. Magazine

“Bronsky instinctively understands that the way to a reader’s heart is through great characters.”
—Library Journal