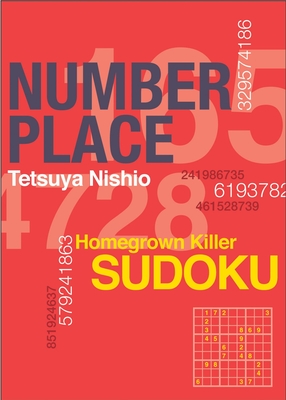 By Tetsuya Nishio
$8.90
Not Available

This is book number 2 in the Number Place series.

The puzzles in Number Place are conceived by Japan's greatest puzzler mind, Tetsuya Nishio, who takes extreme pleasure in handcreating his puzzles. His latest series, Number Place, provides 101 Sudoku puzzles plus a handful of logic puzzles and mazes! Now, after readers are through with their Sudoku puzzles, they can test out a whole new line of Nishio-created torture!

These pocket-sized collections are the perfect companion for the on-the-go puzzler! The continued success of Sudoku means that there's a new breed of Sudoku puzzler: experienced, resourceful, and ready for puzzles that transcend the dull specimens one encounters in the daily newspaper, online, or in mass market magazines. It is this sector of puzzle solvers that grows every day, and the sector for which Vertical has conceived its new line of puzzle books. Number Place takes Sudoku to new levels.  Twice as hard as Sudoku Plus, these puzzles are beyond Sudoku...they are number placement and the world of puzzling will never be the same.

According to The Times of London, "Tetsuya Nishio is the undisputed grand 'puzzle master' of Sudoku: a bespectacled fiend from the darkest suburbs of Tokyo who spends his every waking hour devising abominable new ways to torture our brain cells. His only weapon is logic, but, in his own words, 'It is a knife that kills.' His commitment to deviousness is absolute."

Nishio is a world champion of number-logic puzzles. He reigns as the single-most important figure in Sudoku in Japan.

He invented O'Ekaki (Paint by Sudoku) puzzles in the late 1980s, which are steadily becoming as popular as Sudoku. He is also the chairman of the Japan Puzzle Team at the annual World Puzzle Championships.

At the 2007 World Puzzle Championship, Nishio placed fourth amongst the greatest Sudoku puzzlers in the world!