Before the Feast (Paperback) 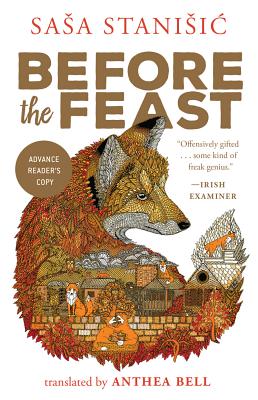 It’s the night before the feast in the village of Fu¨rstenfelde (population: an odd number). The village is asleep. Except for the ferryman—he’s dead. And Mrs. Kranz, the night-blind painter, who wants to depict her village for the first time at night. A bell-ringer and his apprentice want to ring the bells—the only problem is that the bells have gone. A vixen is looking for eggs for her young, and Mr. Schramm is discovering more reasons to quit life than to quit smoking.

Someone has opened the doors to the Village Archive, but what drives the sleepless out of their houses is not that which was stolen, but that which has escaped. Old stories, myths, and fairy tales are wandering about the streets with the people. They come together in a novel about a long night, a mosaic of village life, in which the long-established and newcomers, the dead and the living, craftsmen, pensioners, and noble robbers in football shirts bump into each other. They all want to bring something to a close, in this night before the feast.

Saša Stanišic was born in Višegrad (Yugoslavia) in 1978 and has lived in Germany since 1992. His debut novel, How the Soldier Repairs the Gramophone, was translated into thirty-one languages; Before the Feast was a bestseller and won the renowned Leipzig Book Fair Prize.

Anthea Bell is the recipient of the Schlegel Tieck Prize for translation from German, the Independent Foreign Fiction Prize, and the Helen and Kurt Wolff Prize in 2002 for the translation of W. G. Sebald’s Austerlitz, and the 2003 Austrian State Prize for Literary Translation. She lives in Cambridge, England.

A village fully in the present, yet rife with legends. In Before The Feast, this villagetells its own story—a novel as compelling multi-voiced chorale put in prose.
— Leipzig Book Fair Jury Prize

We are glad. We are ecstatic, actually. We have an honest-to-God wordsmith in Saša Stanišic'. Only seldom does a work of literature embody the lyrical and the realistic simultaneously, the specific and the universal simultaneously, the body and the soul of the world, simultaneously. Stanišic's prose captures the official narrative and the myth, the dream and the rumor, the hearsay, all of it. It captures how we humans see what we later dare to call reality. I love it.

A book like few others. Politically well-versed and stylistically a work of art.
— DIE ZEIT

Serious subjects are raised throughout this impressive and sweeping portrait, including our relationship to history and the responsibility of remembering the past, but this comic novel never takes itself too seriously. The end result is both redemptive and hilarious.

Before the Feast is a big book in every sense: it's vibrant, compassionate, and knowing. Stanišic channels an almost reckless energy into a novel that's at once sprawling and controlled.

Stanišic’s work is seamless, rhythmic, and captivating. Anthea Bell makes for a dream translator, perfectly capturing his whimsy and idiosyncrasies. This is not a book to consume once and leave on the shelf to collect dust. Like your favorite fairy tales, Before the Feast is a story to experience again and again, whose charms will enchant you every time it is read.