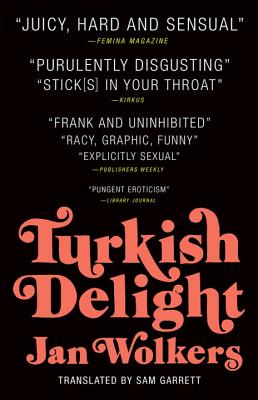 The story of a tempestuous love affair—and the basis for Paul Verhoeven's Oscar-nominated film—Wolkers's controversial masterpiece comes alive in a new translation.

Upon its original publication in 1969, Turkish Delight was a sensation and a scandal. Its graphic language and explicit sex scenes had an explosive effect, but just as revolutionary was its frank, colloquial style. The more straightlaced critics condemned the book, but readers saw a novel that reflected the way that they spoke, thought, and felt.

Turkish Delight opens with a screed: a sculptor in his studio, raging against the love he lost and describing, in gory detail, the state of his life since she left him. Our narrator alternates between the story of his relationship with Olga—its passion and affection, but also its obsessiveness and abuse—and the dark days that followed, as he attempts to recapture what they had when they lived together, “happy as beasts.” The two only reunite during Olga’s inexorable and tragic decline into cancer—the chemo having taken her hair and rotted her teeth, she will only eat the soft, sweet Turkish Delight that her ex-lover brings to her bedside.

In a new translation by Sam Garrett (Herman Koch’s The Dinner), readers get a sense of Wolkers’s revolutionary style and musical prose, Turkish Delight’s particular balance of naked impulse and profound longing.

Tin House Books gratefully acknowledges the support of the Dutch Foundation for Literature, whose generous subsidy made this new translation possible.

Jan Wolkers was an author, sculptor, and one of the "Great Four" writers of Dutch literature. In over forty years Jan Wolkers (1925-2007) wrote a great number of novels, stories, and essays. He also worked as painter and a sculptor. The Auschwitz Monument in Wertheimpark in Amsterdam is one of his works. With his novels and stories he liberated himself and his readers from religion and the stifling and oppressive atmosphere of post war Holland. Turks fruit (Turkish Delight), 1969, also represented the sexual revolution of the sixties. Among the Protestant community his work aroused much resistance, but his success was not to be stopped. With works like Kort Amerikaans (Crew Cut), Turks Fruit (Turkish Delight), Terug naar Oegstgeest (Return to Oegstgeest) and De walgvogel (The Dodo), Jan Wolkers is among the most widely translated Dutch authors.

For his translations of close to forty novels and works of nonfiction, Sam Garrett (b. Harrisburg, PA, 1956) has won prizes and appeared on short lists for some of the world’s most prestigious literary awards. Garrett is the only translator to have twice won the British Society of Authors’ Vondel Prize for Dutch-English translation (in 2003 and again in 2009).

Like Henry Miller, Wolkers writes with a tremendous appetite for life and a painterly approach to the sensuous. He is a refreshing stylist.
— New York Times Book Review

Turkish Delight is a rare and filthy-beautiful tale that''''s funny, sad, and not full of shit. Exploding with young love, lust and longing, the poignancy of firsts, and the tragedy of time, it''''s really everything I want in a book.

— Melissa Broder, author of SO SAD TODAY and LAST SEXT

An honest view of a sticky love affair. . . . Garrett''''s translation of Wolkers''''s prose is often lyrical and always heartfelt; the juxtaposition of poetry with crude language echoes the narrator''''s passionate love and enormous lust. Turkish Delight is a serious and artistic literary work.