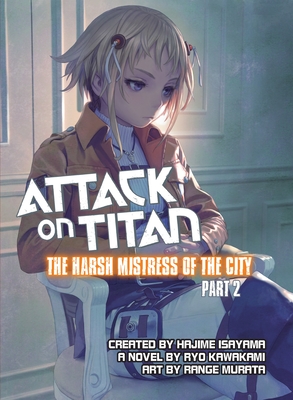 This is book number 2 in the Attack on Titan. series.

Shinganshina has been breached, and humanity has retreated to Wall Rose-for the most part. Quintra District, situated at the western end of Wall Maria, is holding out despite being hemmed in by the Titans on both the exterior and the formerly interior sides.

In this concluding half of this side story, Rita Iglehaut, acting commander of the local forces, struggles to turn her isolated hometown into something of a city of its own. Her draconian methods, however, shock the residents, not least Mathias Kramer, her childhood friend.

Born in 1976, Ryo Kawakami is a novelist and game author. A graduate of the Kobe University School of Business, Kawakami initially broke into the media scene by working with Japanese role-playing game maker The SNE Group. After writing numerous light novels and RPG game replay books, Kawakami would take on a broader audience by writing the script to the award winning game - CATHERINE by Atlus (Best Video Game Story 2011 - IGN Magazine/PlayStation3 Game of the Year - Onion AV Club). The Harsh Mistress of the City is his most recent novel and first in English.