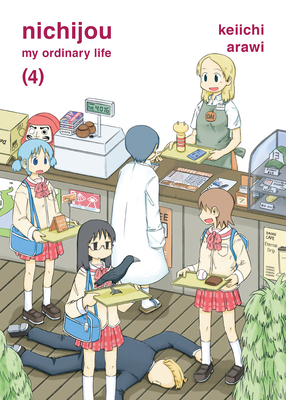 This is book number 4 in the Nichijou series.

The denizens of the fey kingdom must placate their princess. Mio invents an explosive athletic move. A newly-opened cafe bedevils Yuuko. Yuuko seizes a chance to send Mio’s already-active imagination into overdrive, and Nakamura, the science teacher, takes a professional interest in Nano.

have another slice of nowhere-near-ordinary life.

His short Nichijou won Kadokawa's 22nd ACE Award for New Artists and by November 2006 Nichijou was regularly serialized in Kadokawa's flagship magazine Shonen Ace. Nichijou has since then sold more than a million copies and has seen cartoon and video game adaptations.

It was also selected by Guillermo del Toro as one of the top comics out of Japan today for Asahi News' SUGOI Japan project.

"nichijou is a silly and fun book that works great as you can gobble up a whole volume and love it or spread out the chapters as little morsels of humor that delight over a few weeks. definitely recommended." - Fandom Post