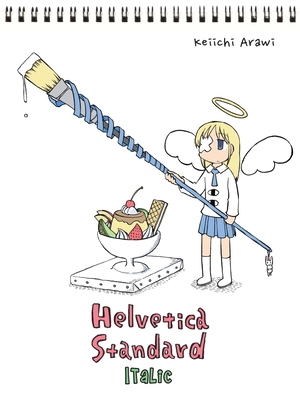 Just as nothing is ordinary in the world of my ordinary life, nothing is standard about Helvetica Standard.

The second half of this behind-the-scenes peek at the surreal aesthetic of Keiichi Arawi contains a heavier emphasis on artwork created to tie into nichijou as well as a hearty helping of short-format manga, tales and snippets from Arawi’s life as a working manga artist, and the identity of the mysterious novelist John Mark Ware is revealed...

Keiichi Arawi (1977-) is a professional comic artist and illustrator. Originally from Gunma, Japan, he was raised in the city of Maebashi. By the time he was 19 he entered the world of comics drawing short stories for Media Factory's Comic Flapper (My Neighbor Seki, 7 Billion Needles). While his first series KazeMachi was short-lived it caught the attention of one of the bigger publishers in Japan, Kadokawa Publishing. His short "Nichijou" won Kadokawa's 22nd ACE Award for New Artists and by November 2006 Nichijou was regularly serialized in Kadokawa's flagship magazine Shonen Ace. Nichijou has since then sold more than a million copies and has seen cartoon and video game adaptations.