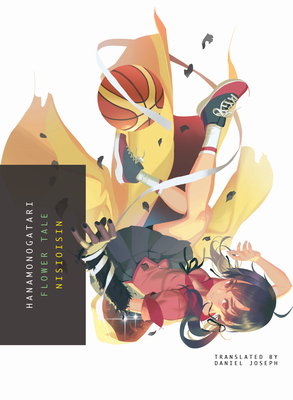 This is book number 10 in the Monogatari series.

Our sorry hero, his reformed girlfriend, and the amnesiac class president have all graduated from their high school out in the boondocks, and self-described Sapphist and ex-basketball ace Kanbaru, retired by reason of an “injury,” is starting her senior year and the narrator of this volume—her voice far more introspectivethan the smutty jock’s we thought we knew.

Bereft of the company of her beloved mentors, the only other person around her with any working knowledge of aberrations the junior Ogi Oshino, apparently a relative of the Hawaiian-shirted folklorist, she feels a bit alone and blue, and sick with dread that the devil residing in her left arm courtesy of the Monkey’s Paw might act up again while she sleeps.

Investigating a rumor that she fears might lead back to her, the former star ends up peering into an abyss of negativity called Roka—a “wax flower” to take the characters’ meaning. Trapped in a pit the like of which could only be escaped by the one girl who was able to pull off slam-dunks in her basketball nationals, can the penitent Kanbaru, however, still be aggressive?

There are few authors in Japan who have reached the heights of success as NisiOisin. Born in 1981, Nisio dropped out of Ritsumeikan University in Kyoto, to pursue a career in story-telling. Initially he had ambitions to be a comic artist, but when he realized his art was not up to snuff, he began to focus on his writing, eventually winning the 23rd Mephisto Prize, for Kubikiri Cycle (Del Rey) recognizing his talents as a mystery writer, at the age of 20. Since his debut in 2002 Nisio has penned more than 50 novels and a number of comics. And he has quickly become one of Japan's top selling author's in recent memory with more than 5 million units sold since 2009. In 2014, as in 2012, he was the top selling author in Japan (outselling Haruki Murakami by more than half a million units).

Nishio's works often cover themes of youth, but are framed in genres that are familiar to the masses. His works tend to mix mystery with comedy and touches or romance and/or the supernatural. He is a modern author in every sense, sometimes even experiementing with the Japanese language itself.

Many of his works have been adapted into animated television series and films. His best known works are the Monogatari series and Katanagatari.