Arakawa Under the Bridge 6 (Paperback) 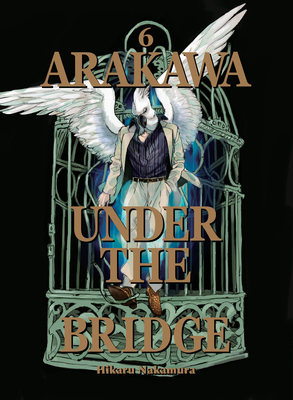 Best-selling mangaka Hikaru Nakamura (Saint Young Men) makes her English language debut with this surreal comedy starring a 620-year-old water sprite, a man with a star for a head, a nun, and a samurai who runs a barber shop under Tokyo's Arakawa Bridge.

Part 6 contains volumes 11 and 12 of the Japanese edition.

The Venus-bound rocket successfully launched against all odds… and now Rec is back after an out-of-this-world encounter with Nino’s folks, and even Takai had his own alien encounter that leaves him transformed. As the seasons turn, everyone’s eccentricities spiral out and twine together, and the Mayor finds himself expecting…!

Born in 1984, in the artisan filled city of Shizuoka, Hikaru Nakamura is one of the top selling manga artists today. Since 2001, when she was only 16 years old, Nakamura was already making headways in the world of manga. Her first series Nakamura Factory was a mini-hit for Japanese publishers SquareEnix. She would follow that up with Arakawa Under the Bridge, which would eventually be adapted into an animated television series.

While Arakawa was her break-through, her next work Saint Young Men would take her to a level of success not seen in Japan in years Attack on Titan and Naruto in the process having sold more than ten million units. Arakawa Under the Bridge is her English language debut, but she has been published throughout Europe and Asia for years.

“Fourth-wall breaking aside, I am amazed at how Nakamura can effortlessly turn Arakawa Under the Bridge from one that tickles your funny bone to pulling at your heartstrings.”   — TheOASG