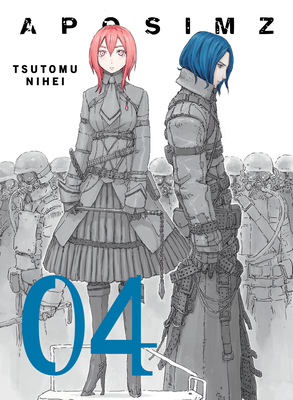 This is book number 4 in the APOSIMZ series.

From acclaimed mangaka Tsutomu Nihei, the creator and artist behind BLAME! and Knights of Sidonia, comes his newest Sci-Fi epic.

While their fight against the Empire continues, Titania uses her sensing abilities to track King Kajiwan as he heads toward the forbidden place known as the Gosabyo. During their pursuit of Kajiwan, Titania and her allies encounter strange phenomenon and notice the Rebedoan army behaving in mysterious ways. The culprit turns out to be the terrifying power wielded by Emperor Nichiko Suou...

Tsutomu Nihei is an internationally known Japanese comic artist and draftsman. Born in 1971, Nihei made his debut in the comics world as the winner of the 1995 Afternoon Magazine Four Seasons Award for short stories. He then briefly worked as an assistant to veteran comicker Tsutomu Takahashi before making his break-through hit BLAME! (published by Tokyopop).

The BLAME! franchise was so well received worldwide, that it inspired an animated mini-series and eventually drew the attention of Marvel Comics in the US. Nihei would later go on to draw Wolverine (X-Men) and HALO comics for Marvel to great fanfare. An architectural student, Nihei's early work were mainly wordless, relying on visuals and backgrounds to tell their stories. Now, his works are deeply rooted in hard science-fiction, as was seen in the multiple NY Times Bestselling books HALO: The Graphic Novel (published by Marvel Comics) and BIOmega (published by Viz Media).