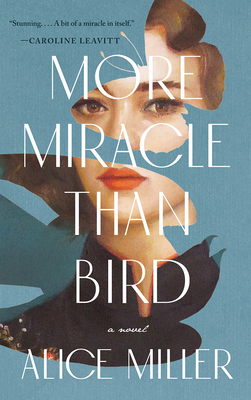 On the eve of World War I, twenty-one-year-old Georgie Hyde-Lees meets the acclaimed poet W. B. Yeats at a soirée in London. Although Yeats is famously eccentric and many years her senior, Georgie is drawn to him, and when he extends a cryptic invitation to a secret society, her life is forever changed.

As zeppelins stalk overhead and bombs bloom against the skyline, Georgie finds purpose tending to injured soldiers in a makeshift hospital. She befriends the wounded and heartbroken Lieutenant Pike, who might need more from her than she is able to give. At night, she escapes with Yeats into a darker world, becoming immersed in the Order, a clandestine society of ritual and magic.  As forces—both of this world and the next—pull Yeats and Georgie closer together and then apart, Georgie uncovers a secret that threatens to undo it all.

In bright, commanding prose, author Alice Miller illuminates the fascinating and unforgettable courtship of Georgie Hyde-Lees and W. B. Yeats. A sweeping tale of faith and love, lost and found and fought for, More Miracle than Bird ingeniously captures the moments—both large and small—on which the fates of whole lives and countries hinge.

Alice Miller is a graduate of the Iowa Writers’ Workshop and the International Institute of Modern Letters. She is on the faculty of the MFA program at Cedar Crest College.

The lens through which a story is told makes all the difference. . . . Miller deftly presents a portrait of Georgie, a young woman calibrating her place in the world, and her shifting relationship with the man she adores.
— Booklist

Subtle and low-key, Miller’s debut coolly appraises the poet while fully inhabiting the woman in his shadow.
— Kirkus Reviews

A shimmering novel about our yearnings for forever, and the greatest mystery of life, which is, of course, love. It must be said: More Miracle than Bird is a bit of a miracle in itself.

— Caroline Leavitt, author of With or Without You

Alice Miller proves herself to be a superb medium. . . . A vivid portrait of mercurial artists in a tumultuous time.
— Christopher Castellani, author of Leading Men

Engrossing and impressive.
— Lisa Gornick, author of The Peacock Feast

More Miracle than Bird will ring in my mind’s ear for a long time, and I will return to its pages. A wonderful book!

— Jay Parini, author of Borges and Me

Miller has written a luminous novel about the women involved with the early 20th century’s most notable men poets, offering a fresh portrayal of the women’s brilliant complexity. Ambition, artifice, and adventure draw them through a contingent world unsettled by spirits, mediums, the war dead, and soon-to-be dead. But Miller is up to more than telling a story of these fascinating lives: More Miracle Than Bird makes a sly and disturbing inquiry into how art truly gets made and to whom it belongs.

— Katherine Dion, author of The Dependents

Miller probingly explores the sacrifices that accompany loving a great artist, as well as ‘Willy’ and Georgie’s fascination with the occult.
— Keija Parssinen, author of The Unraveling of Mercy Louis