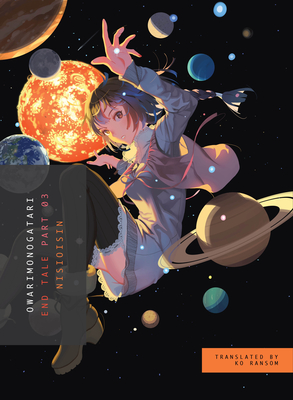 This is book number 19 in the Monogatari series.

From the best selling novel series comes the latest book of the final season of the Monogatari Series.

No good deed goes unpunished, they say, and so does friendship and lowering your intensity as a human, they don’t say—alas, for all his literally painful hustle and inveterate need to save others, our brave fool of a hero ends up in hell, a conception of the inferno in its full Buddhist glory, and muses (lol) if there’s a return ticket.
Told in three chapters, the final part of End Tale concludes the story proper and resolves the series’ panoply of ongoing mysteries: the dues of a do-gooder for relying on a power not his own, the identity of a shady transfer student, the outcome of a class president’s questing abroad, and even the true name of a park.
Araragi, indeed, is the one who knows, but along the way he meets old faces, really every last one of them, who aid him on his journey for understanding, and perhaps for salvation, and you for one might not be surprised if he had another rendezvous with an erstwhile “cloistered princess” before it—guess what it is—sees an end.

There are few authors in Japan who have reached the heights of success as NisiOisin. Born in 1981, Nisio dropped out of Ritsumeikan University in Kyoto, to pursue a career in story-telling. Initially he had ambitions to be a comic artist, but when he realized his art was not up to snuff, he began to focus on his writing, eventually winning the 23rd Mephisto Prize, for Decapitation recognizing his talents as a mystery writer, at the age of 20. Since his debut in 2002 Nisio has penned more than 50 novels and a number of comics. And he has quickly become one of Japan's top selling author's in recent memory with more than 5 million units sold since 2009. In 2014, as in 2012, he was the top selling author in Japan (outselling Haruki Murakami by more than half a million units).