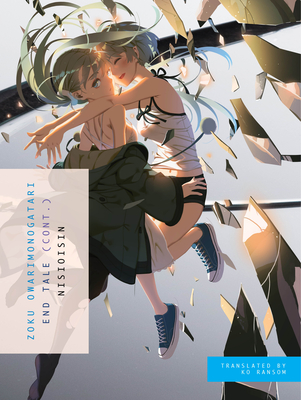 This is book number 20 in the Monogatari series.

Just when we thought the darkness menacing the town had been identified, named, and tamed, clear and unclear mysteries of seasons past looming or surfacing, then resolving, not without tears, not without bittersweetness, of course, but satisfyingly, in a tripartite finale, all loose ends tied up into, or at least with, a bow…

The End Tale continues—if only for one last time, in a bonus stage for the ages, as our softie of a protagonist who wished for all parties involved, including himself, maturely enough, to end up happy, sees his reflected image freeze in a mirror and regretfully, regrettably, reaches for it to find himself through the looking glass.

In an alternate reality where bits of the world have been flipped around, the hero comes face to face with the hidden side(s) of familiar faces, along with author NISIOISIN, whose bravura attempt to reimagine character possibilities concludes, with signature flair, the MONOGATARI series proper—thank you for reading.

There are few authors in Japan who have reached the heights of success as NisiOisin. Born in 1981, Nisio dropped out of Ritsumeikan University in Kyoto, to pursue a career in story-telling. Initially he had ambitions to be a comic artist, but when he realized his art was not up to snuff, he began to focus on his writing, eventually winning the 23rd Mephisto Prize, for Kubikiri Cycle (Del Rey) recognizing his talents as a mystery writer, at the age of 20. Since his debut in 2002 Nisio has penned more than 50 novels and a number of comics. And he has quickly become one of Japan's top selling author's in recent memory with more than 5 million units sold since 2009. In 2014, as in 2012, he was the top selling author in Japan.

Nishio's works often cover themes of youth, but are framed in genres that are familiar to the masses. His works tend to mix mystery with comedy and touches or romance and/or the supernatural. He is a modern author in every sense, sometimes even experiementing with the Japanese language itself.

Many of his works have been adapted into animated television series and films. His best known works are the Monogatari series and Katanagatari.