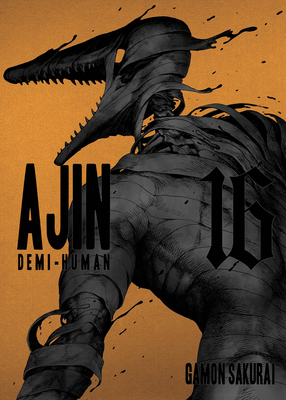 This is book number 16 in the Demi-Human series.

The shooting of Kaito has triggered a Flood in the normally emotionless Nagai, releasing a massive number of IBMs. Not wanting to miss out on the fun, Sato has matched his pace, and Iruma Base is overrun with countless black ghosts. Dr. Ogura, the world's leading IBM researcher, makes his way toward the heart of the chaos, even as the story barrels toward a moment of truth regarding the origin and very nature of Demi-Humans.

"I'll probably say this every time I review a volume of Ajin, but it's worth reminding everyone not to miss out on this one. With each release my admiration of Sakurai grows. There's a remarkable combination of fluidity and weight to his action sequences; he has a keen eye for dynamic angles and never holds back when a scene calls for some especially heavy hits... Ajin is more than just solid art, though... This is absolutely a series worth starting if you haven't already, and it only gets better with each new volume."       -Web Otaku USA