The Book of Atlantis Black: The Search for a Sister Gone Missing (Paperback) 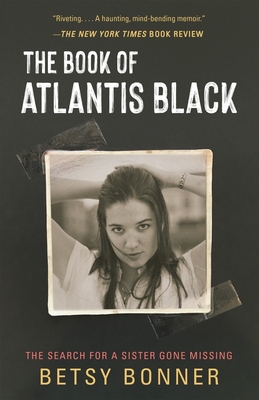 A quick, enjoyable read, The Book of Atlantis Black is part true crime story, part memorial to a dead, forgotten sister, and part justification for said sister’s ways. As much a memoir as an investigation, the book provides an insight into the life of Atlantis Black, a troubled child who grew into a troubled adult, and her mysterious and, at least according to the author, unsolved, disappearance. With autobiographical elements as well, the author shows how a toxic household can birth drastically different stories as it maps the lives of the author, the reasonably successful, world-traveled Betsy Bonner, and her polar opposite yet alarmingly similar sister, Atlantis Black.

An NPR Best Book of the Year

"A mixture of biography and true crime, this narrative . . . offers more plot twists, shocking revelations and shady characters than most contemporary thrillers." —NPR

The Book of Atlantis Black will have you questioning facts, rooting for secrets, and asking what it means to know the truth.

A young woman is found dead on the floor of a Tijuana hotel room. An ID in a nearby purse reads “Atlantis Black.” The police report states that the body does not seem to match the identification, yet the body is quickly cremated and the case is considered closed.

So begins Betsy Bonner’s search for her sister, Atlantis, and the unraveling of the mysterious final months before Atlantis’s disappearance, alleged overdose, and death. With access to her sister’s email and social media accounts, Bonner attempts to decipher and construct a narrative: frantic and unintelligible Facebook posts, alarming images of a woman with a handgun, Craigslist companionship ads, DEA agent testimony, video surveillance, police reports, and various phone calls and moments in the flesh conjured from memory. Through a history only she and Atlantis shared—a childhood fraught with abuse and mental illness, Atlantis’s precocious yet short rise in the music world, and through it all an unshakable bond of sisterhood—Bonner finds questions that lead only to more questions and possible clues that seem to point in no particular direction. In this haunting memoir and piercing true crime account, Bonner must decide how far she will go to understand a sister who, like the mythical island she renamed herself for, might prove impossible to find.

Betsy Bonner is the author of Round Lake, a poetry collection published by Four Way Books. She is a faculty member of the Writer’s Foundry M.F.A. program at St. Joseph’s College in Brooklyn, New York and the former Director of the 92Y Unterberg Poetry Center, where she teaches an annual poetry seminar. Her work has appeared in The New Republic, The Paris Review, Parnassus, Poetry Daily, The Brooklyn Quarterly and The Southampton Review. She holds an MFA in creative writing from Columbia University and a BA from Sarah Lawrence College. She is a fellow of the MacDowell Colony, Eliot House and the VCCA, and a mentor in PEN’s Prison Writing Program.

Gripping. . . . Betsy Bonner is the storyteller, but Atlantis Black is the story, the mystery, the victim, sometimes the perpetrator and always the question.
— NPR

You'll read it in one sitting.
— HelloGiggles

A haunting, profound investigative memoir that will resonate with readers as both a compelling true crime story and an affecting literary work.
— Library Journal, Starred Review

Carefully crafted, haunting, and absorbing, this thrilling memoir echoes in the head and heart long after the final page.
— Kirkus Reviews

Maddening and fascinating. The reader is made to feel what it’s like to be denied answers in an essential search.
— Amy Hempel, author of Sing To It

This memoir is as haunting, as memorable, and as magnetic as the tragic young woman at its core. I tore through it at lightning speed but I also didn’t want it to end.
— Amanda Fortini

Betsy Bonner writes with the precision of a poet and the courage of a survivor. I could not put this book down.
— Domenica Ruta, author of Last Day

An unforgettable portrait of an impossible yet compelling young woman taken down by her own demons, and fighting every step of the way.
— David Gates, author of A Hand Reached Down to Guide Me

Suspenseful and beautiful. . . . I’m speechless.
— Jeannie Vanasco, author of Things We Didn't Talk About When I Was a Girl

A cooly rendered look at the devastation of survivor’s guilt and other ways people unravel in the wake of tragedy.
— Vanity Fair