Icebound: Shipwrecked at the Edge of the World (Paperback) 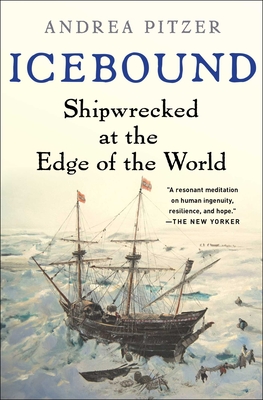 In the bestselling tradition of Hampton Sides’s In the Kingdom of Ice, a “gripping adventure tale” (The Boston Globe) recounting Dutch polar explorer William Barents’ three harrowing Arctic expeditions—the last of which resulted in a relentlessly challenging year-long fight for survival.

The human story has always been one of perseverance—often against remarkable odds. The most astonishing survival tale of all might be that of 16th-century Dutch explorer William Barents and his crew of sixteen, who ventured farther north than any Europeans before and, on their third polar exploration, lost their ship off the frozen coast of Nova Zembla to unforgiving ice. The men would spend the next year fighting off ravenous polar bears, gnawing hunger, and endless winter.

In Icebound, Andrea Pitzer masterfully combines a gripping tale of survival with a sweeping history of the great Age of Exploration—a time of hope, adventure, and seemingly unlimited geographic frontiers. At the story’s center is William Barents, one of the 16th century’s greatest navigators whose larger-than-life ambitions and obsessive quest to chart a path through the deepest, most remote regions of the Arctic ended in both tragedy and glory. Journalist Pitzer did extensive research, learning how to use four-hundred-year-old navigation equipment, setting out on three Arctic expeditions to retrace Barents’s steps, and visiting replicas of Barents’s ship and cabin.

“A resonant meditation on human ingenuity, resilience, and hope” (The New Yorker), Pitzer’s reenactment of Barents’s ill-fated journey shows us how the human body can function at twenty degrees below, the history of mutiny, the art of celestial navigation, and the intricacies of building shelters. But above all, it gives us a firsthand glimpse into the true nature of courage.

Andrea Pitzer is a journalist whose writing has appeared in The Washington Post, The New York Review of Books, Outside, The Daily Beast, Vox, and Slate, among other publications. She has authored two previous books, One Long Night and The Secret History of Vladimir Nabokov—both critically acclaimed. She received an undergraduate degree from Georgetown University’s School of Foreign Service in 1994, and later studied at MIT and Harvard as an affiliate of the Nieman Foundation for Journalism. She grew up in West Virginia and currently lives with her family near Washington, DC. Icebound is her most recent work.

“A gripping adventure tale that deserves an honored place in the long bookshelf of volumes dealing with arctic shipwrecks, winter ordeals, and survival struggles.”
—Boston Globe

"A resonant meditation on human ingenuity, resilience, and hope."
—The New Yorker

“A fascinating modern telling of Barents’s expeditions….Ms. Pitzer presents a compelling narrative situated in the context of Dutch imperial ambition. She writes vividly about the ‘unnerving isolation’ of venturing north and east of Scandinavia into uncharted waters.”
—Wall Street Journal

“The expedition’s highlight reel included everything a polar fan could want: hand-to-hand combat with polar bears and walruses; scurvy and vitamin A poisoning; asphyxiation by carbon dioxide; frostbite, keelhauling and hangings; plus the sighting of a rare atmospheric optical phenomenon called a parhelion…Pitzer writes with care about the Arctic landscape Barents encountered…A reminder that there was once a time when things were unknown.”
—New York Times Book Review

“The name of William Barents isn’t that familiar to us these days beyond perhaps a line of type on your atlas… but this enthralling, elemental and literally spine-chilling epic of courage and endurance should change all that.”
—Daily Mail (UK)

“The stuff of castaway movies…Pitzer does a fine job of telling this gripping adventure, painting a convincing portrait of an obsessive who put his life on the line for glory and knowledge—and succumbed.”
—The Guardian

“Dramatic and dire…[the men]fight off polar bears that rear up from nowhere, attacking until they are slaughtered or driven away. The ship tacks endlessly and desperately to escape floating ‘mountains of steel’…Ms. Pitzer’s descriptions of the region sing.”
—The Economist

“Narratives of frozen beards in polar hinterlands never lose their appeal. Most of the good stories have been told, but in Icebound Andrea Pitzer fills a gap, at least for the popular reader in English, with the story of the 16th-century Dutch mariner William Barents….Elegant.”
—The Spectator

“Richly descriptive…The real grip of the book lies in the horrendous dangers and hardships endured by Barents and his shipmates, and the determination with which they met them... For these explorers, it was as if they had visited another planet, a hostile place of alien creatures and otherworldly horrors.”
—Minneapolis Star Tribune

“Andrea Pitzer does a fine job of telling this gripping adventure, painting a convincing portrait of an obsessive who put his life on the line for glory and knowledge—and succumbed.”
—The Observer (UK)

“A masterful re-creation of a desperate fight for survival [that] takes us back nearly half a millennium and plunks us down in a vividly realized world…More than just another book about a disastrous sea voyage, this is a richly evocative story about a particular period in the history of exploration. Icebound deserves a place beside such classics as Alfred Lansing's Endurance: Shackleton's Incredible Voyage and Roland Huntford’s The Last Place on Earth: Scott and Amundson's Race to the South Pole.”
—Booklist (starred review)

"Long before Bering or Amundsen, long before Franklin or Shackleton, there was William Barents, in many ways the greatest polar explorer of them all. In this engrossing narrative of the Far North, enriched by her own adventurous sojourns in the Arctic, Andrea Pitzer brings Barents’ three harrowing expeditions to vivid life—while giving us fascinating insights into one of history's most intrepid navigators."
—Hampton Sides, New York Times bestselling author of In the Kingdom of Ice

“Who knew that William Barents’s 16th-century journeys so strongly influenced the great 19th-century arctic expeditions? Andrea Pitzer’s visceral, thrilling account is full of such tantalizing surprises, a delight on every level.”
—Andrea Barrett, National Book Award-winning author of Ship Fever and The Voyage of the Narwhal

“Buried in snow, besieged by ice, and hunted by ravenous polar bears, explorer William Barents and his Dutch shipmates, seeking a northern trade route to the Far East, found themselves trapped in an epic battle for survival in the unknown, ice-locked Arctic. Andrea Pitzer’s worthy and superb account keeps us enthralled to the last chilling word.”
—Dean King, nationally bestselling author of Skeletons on the Zahara and The Feud

“The bone-chilling tale of a legendary journey in which survival depended on leadership, teamwork, and superhuman endurance—as well as the ability to outpace and out-battle icebergs and polar bears….A masterwork of narrative nonfiction.”
—Mitchell Zuckoff, New York Times bestselling author of Frozen in Time and Fall and Rise

"An enchantment. Pitzer expertly draws the reader into landscapes so unfamiliar and unsettling that they may as well be stolen from science fiction….[Features] ordeals that—to today’s readers—can seem nearly unimaginable.”
—Steve Silberman, author, NeuroTribes: The Legacy of Autism and the Future of Neurodiversity

“Page after page, Pitzer puts you inside one of the greatest adventures you’ll ever encounter. Beyond thrilling. Beyond enthralling. I found this a tale so involving that I simply couldn’t put it down.”
—Martin W. Sandler, author of the National Book Award finalist 1919 and The Impossible Rescue

"Stunning…shines with the glitter of sun reflecting off polar ice, auroral light shimmering in the night sky, and—mostly—the sheer, stubborn power of the undaunted human spirit."
—Deborah Blum, Pulitzer Prize-winning author of The Poison Squad: One Chemist's Single-Minded Crusade for Food Safety at the Turn of the Twentieth Century

"Fascinating, bizarre, and very human…A riveting account of lives drawn into a world that seems at once dream and nightmare."
—Blair Braverman, author of Welcome to the Goddamn Ice Cube: Chasing Fear and Finding Home in the Great White North

“An epic tale of exploration, daring, and tragedy told by a fine historian—and a wonderful writer.”
—Peter Frankopan, internationally bestselling author of The Silk Roads: A New History of the World

“In Icebound Andrea Pitzer has accomplished something unique—she presents the daily lives of the early Dutch Arctic explorers with such precision and clarity that the reader becomes as immersed in the rawness of their experiences as one could ever imagine. Through unflinching detail, she describes the struggle for survival faced by three separate expeditions seeking a northeast passage from Europe to China (one of those voyages culminating in being marooned for months in the frozen north). Without sentimentality, she describes the perseverance and selfless sacrifice of the men involved, which allows a glimpse into the true nature of human courage. This is a book you will not want to put down, except to catch your breath.”
—William E. Glassley, author of A Wilder Time: Notes From a Geologist at the Edge of the Greenland Ice

“Andrea Pitzer accomplishes for William Barents what the explorer could not do for himself: rescue his amazing life from the grip of the Arctic and centuries of hagiography. The Barents who appears in Pitzer’s spyglass seems impressively close to the actual man: intensely bold, highly skilled, and catastrophically wrong.”
—P.J. Capelotti, author of The Greatest Show in the Arctic