KG: A to Z: An Uncensored Encyclopedia of Life, Basketball, and Everything in Between (Hardcover) 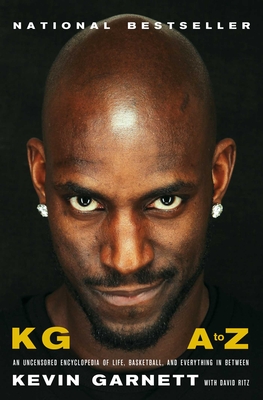 This book is as high energy as he is and is full of anecdotes about his life and NBA career. A lot of fun.

A unique, unfiltered memoir from the NBA champion and fifteen-time all-star ahead of his induction into the Hall of Fame.

Kevin Garnett was one of the most dominant players the game of basketball has ever seen. He was also one of its most outspoken. Over the course of his illustrious twenty-one-year NBA career, he elevated trash talk to an art form and never shied away from sharing his thoughts on controversial subjects. In KG A to Z, published ahead of Garnett’s induction into the Basketball Hall of Fame, he looks back on his life and career with the same raw candor.

Garnett describes the adversity he faced growing up in South Carolina before ultimately relocating to Chicago, where he became one of the top prospects in the nation. He details his headline-making decision to skip college and become the first player in two decades to enter the draft directly from high school, starting a trend that would be followed by future superstars like Kobe Bryant and LeBron James. He shares stories of playing with and against Bryant, James, Michael Jordan, and other NBA greats, and he chronicles his professional ups and downs, including winning a championship with the Boston Celtics. He also speaks his mind on a range of topics beyond basketball, such as fame, family, racism, spirituality, and music.

Garnett’s draft decision wasn’t the only way he’d forever change the game. His ability to play on the perimeter as a big man foreshadowed the winning strategy now universally adopted by the league. He applies this same innovative spirit here, organizing the contents alphabetically as an encyclopedia. If you thought Kevin Garnett was exciting, inspiring, and unfiltered on the court, just wait until you read what he has to say in these pages.

Kevin Garnett is one of the most accomplished players in the history of basketball. His achievements include a world championship with the Boston Celtics, an Olympic gold medal with Team USA, the regular season MVP, and Defensive Player of the Year awards (making him one of just five players to receive both honors in their career), fifteen NBA All-Star Game appearances, and an All-Star Game MVP award. He is a member of the Naismith Memorial Basketball Hall of Fame’s Class of 2020. He has worked as a basketball analyst for TNT, had an acclaimed supporting role in the 2019 feature film Uncut Gems, and is the subject of a forthcoming Showtime documentary. In his post-NBA career, he has also trained some of the league’s leading young superstars.

David Ritz is a songwriter who has collaborated with stars like Janet Jackson and Marvin Gaye, as well as a renowned ghostwriter who has authored more than fifty books for some of the biggest stars in music: Aretha Franklin, Marvin Gaye, Ray Charles, Lenny Kravitz, Joe Perry, Smokey Robinson, Don Rickles, and Willie Nelson, to name a few. His articles have appeared in The New York Times, Rolling Stone, Essence, People, Art Connoisseur, and elsewhere. He lives in Los Angeles with Roberta, his wife of nearly fifty years.

“Kevin Garnett played basketball with unrivaled intensity and eccentricity…Happily, his new memoir is shot through with these qualities as well. Abjuring a standard chronology, KG A to Z tells the author’s story alphabetically…The glossary format suits his restless mind.”—Josh Swansburg, The New York Times Book Review

“The athlete autobiography is a well-established though often disappointing genre. It’s rare for one to truly stand out among the many disposable ones that are released each and every year. Garnett’s new book, KG: A to Z, co-written with David Ritz, is one of those very satisfying exceptions. One reason is that KG: A to Z is not presented as a traditional narrative. The book travels alphabetically through dozens of different entries with Garnett giving his thoughts on disparate topics such as video games, Family Guy, Allen Iverson, Uncut Gems, the Book of Job, and many more. In a more standard autobiography, many of the detours taken here would be annoying, a distraction from an overarching story, but here, this format works to Garnett’s advantage…Readers are certain to come away feeling like they just shared a wonderful time with Garnett as he regaled them with his personal opinions and favorite stories. For any NBA fan, such an experience would be a true delight and this book is the closest most of us will ever have to replicate it for ourselves…Garnett’s autobiography captures his large and passionate biography as well as any book ever could, making it one of the rare books by an athlete worth intentionally seeking out.” —Micah Wimmer, Fansided.com