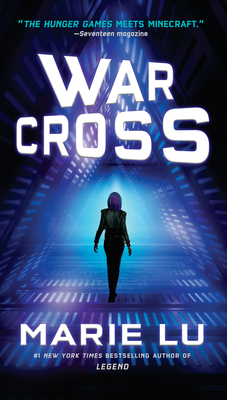 This is book number 1 in the Warcross series.

From #1 New York Times bestselling author Marie Lu—when a game called Warcross takes the world by storm, one girl hacks her way into its dangerous depths.

For the millions who log in every day, Warcross isn’t just a game—it’s a way of life. The obsession started ten years ago and its fan base now spans the globe, some eager to escape from reality and others hoping to make a profit. Struggling to make ends meet, teenage hacker Emika Chen works as a bounty hunter, tracking down Warcross players who bet on the game illegally. But the bounty-hunting world is a competitive one, and survival has not been easy. To make some quick cash, Emika takes a risk and hacks into the opening game of the international Warcross Championships—only to accidentally glitch herself into the action and become an overnight sensation.

Convinced she’s going to be arrested, Emika is shocked when instead she gets a call from the game’s creator, the elusive young billionaire Hideo Tanaka, with an irresistible offer. He needs a spy on the inside of this year’s tournament in order to uncover a security problem . . . and he wants Emika for the job. With no time to lose, Emika’s whisked off to Tokyo and thrust into a world of fame and fortune that she’s only dreamed of. But soon her investigation uncovers a sinister plot, with major consequences for the entire Warcross empire.

In this sci-fi thriller, #1 New York Times bestselling author Marie Lu conjures an immersive, exhilarating world where choosing who to trust may be the biggest gamble of all.

Marie Lu is the author of the #1 New York Times bestselling series The Young Elites, as well as the blockbuster bestselling Legend series. She graduated from the University of Southern California and jumped into the video game industry as an artist. Now a full-time writer, she spends her spare time reading, drawing, playing games, and getting stuck in traffic. She lives in Los Angeles with her illustrator/author husband, Primo Gallanosa, and their dogs.

“A vibrant, action-packed shot of adrenaline. Lu delivers characters with heart and determination, then sets them loose in a luminously conceived world of infinite possibility.”—Leigh Bardugo, #1 New York Times bestselling author of Six of Crows

“Marie Lu’s Warcross is unlike anything I’ve ever read—clever, smart, romantic—yet exploding with color, action, and unrelenting speed. I flew through this book—it’s absolutely fantastic.”—Sabaa Tahir, #1 New York Times bestselling author of An Ember in the Ashes

“Clear your schedule, because you won’t stop reading Warcross until you’re done. Addictive, fast-paced, and totally immersive, this book takes you from a futuristic Tokyo on a high-tech tour of incredible virtual worlds. Packed with danger, intrigue, and heart-pounding gameplay, set in a world built with an incredible eye for detail, Warcross is Marie Lu’s best book yet.”—Amie Kaufman, New York Times bestselling author of Illuminae

“An immersive world that I didn't want to leave. Warcross is pure genius. I'm ready for the sequel!”—Kami Garcia, #1 New York Times bestselling coauthor of Beautiful Creatures and author of The Lovely Reckless

“The novel is a page-turner, and even those who are not gamers will cheer for Emi as she tries to discover who is genuine and who is not.”—VOYA

“[A]n inventive first in a series that showcases Lu’s versatility as a storyteller. . . . Dystopia, dark fantasy, and now a sci-fi thriller—what can’t Lu do? Her boatloads of fans can’t wait to find out.”—Booklist

"Warcross is the kind of all-consuming fantasy novel that pulls you head-first into a brand new world that begins to feel so familiar you can’t wait to get your hands on the next one."—New York magazine