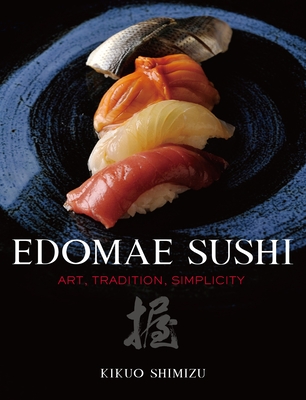 By Kikuo Shimizu, Akira Saito (Photographs by)
$29.95
Not Available

"Edomae" means "in front of Edo," the old name of Japan's capital city. In 19th-century Edo, which was as busy and bustling as today's Tokyo, workers in search of quick, nutritious meals favored sushi made from freshly-caught fish and vinegar-seasoned rice. Over the years, Edomae sushi became increasingly well-respected—no longer considered just inexpensive "fast" food, but, rather, a unique and highly-esteemed cuisine. Today, there are few written records about true Edomae sushi, but its technique and soul have been passed down from chef to chef, maintaining its tradition as it evolved through the decades.

Now, Kikuo Shimizu, a master chef and owner of Kikuyoshi, a tiny but revered Tokyo restaurant, reveals how authentic Edomae sushi is made.

Chef Shimizu introduces about thirty different varieties of fish, and then shows the finished sushi in its ideal Edomae shape. Large photos complement instructive text which describes the ingredients and Shimizu’s own techniques for maximizing flavor: from washing fatty fish in vinegar to enhance its fattiness, and marinating lean fish in kombu kelp to heighten its umami, to scoring the surface of a piece of fish to fit along the arch of the rice nugget, forming a "single existence" from the two ingredients. He also includes some basic recipes and preparation methods.

The essential accompaniments of sushi—wasabi, nori, and rice—are explained in detail, including how and when they are grown and harvested, and how best to prepare them for each season.

The author explores the history of Edomae sushi and writes, from personal experience, about the life and training of a traditional Japanese sushi artist. He shares his insights into the attitude and philosophy of Edomae sushi, a tradition based on simplicity, beauty, and excellence.

Kikuo Shimizu started making sushi at the age of sixteen and has been creating traditional-style sushi for fifty-six years. After a brief apprenticeship, he began working in the fashionable Ginza district of Tokyo under his mentor, Shigezo Fujimoto, the legendary "sushi emperor." In 1971, he opened his own restaurant in the city’s Akasaka neighborhood. Shimizu is famous for shunning media attention; until this book, the only way to experience his sushi was to try to get a reservation at his 9-seat counter.