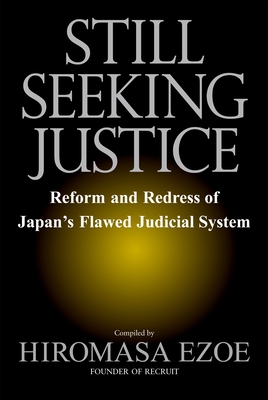 By Hiromasa Ezoe (Compiled by)
$27.94
Not Available

In June 1988, Japan was rocked by a newspaper report alleging that Recruit Co. Ltd., a media conglomerate founded by Hiromasa Ezoe, had bribed the deputy Mayor of Kawasaki City. Thus began what became known as the Recruit Affair, a scandal that shook Japanese politics to the core, just at the height of the Bubble Economy, and brought down the ruling party and the Prime Minister.

At the center of the storm was Ezoe, then the company’s President. Ezoe was detained by the Tokyo District Prosecutors Office, and harshly interrogated. Fueled by the media and public outcry, the prosecutors pressured Ezoe into signing a confession. He was given a suspended sentence, and resigned from the business he had founded as a university student.

In 2010, Hiromasa Ezoe published Where is the Justice? Media Attacks, Prosecutorial Abuse, and My 13 Years in Japanese Court, which told of his experiences during and after the Recruit Affair. Now, in Still Seeking the Justice, Ezoe turns his attention to the recent reforms implemented to Japan’s judicial system, pointing to numerous problems with the new system. He addresses the fact that Japan’s criminal conviction rate of 99.8% would be unimaginable in any other country. But that phenomenal success rate is the result of coercive interrogations away from public scrutiny. Also, as the Recruit case revealed, Japanese judicial decisions are heavily influenced by the content and tone of media reporting. And there are warranted concerns that the new lay judge system will only amplify such influence.

Ezoe and his co-authors, the defense attorneys during his trial, deal with these issues, and offer insightful suggestions for bringing Japan’s judicial system, belatedly, into the twenty-first century.

Hiromasa Ezoe founded University Advertising Co. Ltd. in 1960, while still a student at Tokyo University. In 1984, the company became Recruit Co., Ltd. Ezoe remained as its head until 1988, when he was forced to resign. He is currently Chairman of the Ezoe Scholarship Foundation, which he began in 1971.